HippoPlayer is a music player for macOS, Windows and Linux that mostly focuses on music made for systems such as Amiga, C64, and gaming systems. While HippoPlayer supports MP3, FLAC, Ogg Vorbis, etc it’s not the main target.

The original HippoPlayer is something I used a lot when I had my Amiga. Over many years I tried various players and while some of them hold up none of them has been what I been looking for. Before starting this project I looked around quite a bit for alternatives and nothing really fit the bill.

Closest is likely XMPlay, but that’s for Windows only and closed source which isn’t what I want either but feature wise it’s fairly good. I started this project roughly 7 years ago. I did some work in a private repository and had something very basic up and running. Then other things happened and the project has been on ICE for quite many years but I always had it back in my head that I wanted to come back to it.

The aim I have with HippoPlayer is “a modern music player for your oldsk00l needs” This means it should feel nice and great to use with features that you can expect from a modern player but allow you to play older formats in the best way possible.

To start the player you may just double click the jar or use: java -jar ./javamod.jar or (for just commandline) java -cp ./javamod.jar de.quippy.javamod.main.CommandLine.

This player can be run as a console application, with its swing GUI.

SoundTracker is a music tracking tool for Unix / X11 similar in design to the DOS program FastTracker and the Amiga legend ProTracker. Samples can be lined up on tracks and patterns which are then arranged to a song. Supported module formats are XM and MOD; the player code is the one from OpenCP. A basic sample recorder and editor is also included. SoundTracker is free (“open source”) software, licensed under the GNU GPL.

OpenMPT (shorthand for Open ModPlug Tracker) is completely free and allows you to create and play back some great music on your computer. Based on the original ModPlug Tracker written by Olivier Lapicque, OpenMPT is free software, can import a wide variety of module formats and offers an intuitive, native GUI as well as advanced features such as VST plugins and ASIO output.

In addition to its own song format, OpenMPT can natively edit Impulse Tracker, FastTracker, Scream Tracker and ProTracker module files.

OpenMPT based module player library and libopenmpt based command-line player:

libopenmpt is based on the player code of the OpenMPT project (Open ModPlug Tracker). In order to avoid code base fragmentation, libopenmpt is developed in the same source code repository as OpenMPT.

When XMPlay was first released in 1998, only the XM file format was supported, hence the name “XMPlay”.

This is Windows or Linux program, designed for playing music for AY-3-8912 sound chip (or its analogs are AY-3-8910 and YM2149F). Emulator emulates these sound chips and does not require real ones. Additionally emulator can play CD’s audio tracks and MIDI-files. Optional BASS by Ian Luck can be used for playing MP3 and MOD music.

An internet repository for permanent storage of quality music modules from the tracking and demo scene. The Mod Archive began collecting music modules back in 1996. Since then, it has grown and become one of the largest and oldest collections online, thanks to the artists that contributed to The Mod Archive and the Public Domain in general.

Mikmod is a module player and library supporting many formats, including mod, s3m, it, and xm. Originally a player for MS-DOS, MikMod has been ported to other platforms, such as Unix, Macintosh, BeOS, and Java(!!) 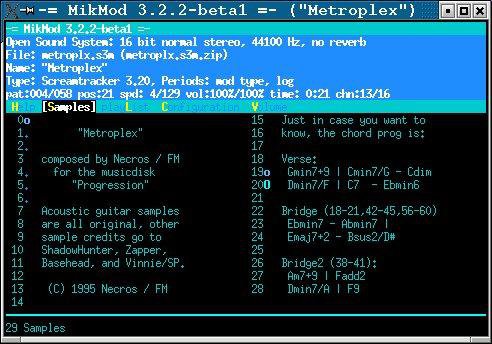 M1 plays the music from arcade games by running the code in the original ROMs (not supplied). This allows entirely authentic playback of classic video game tunes while you work. M1 does not play music from console and computer games; for that you should use Audio Overload.

VUPlayer is a freeware multi-format audio player for Windows
supporting the following formats: