Another type of Foobar2000’s playlists are randomly generated autoplaylists where songs, or groups of songs, are selected randomly from a pool of the same. By predefining a subset of a media library, “pools” of refined selections can be created and then drawn from.

Let’s say you want a playlist of random blues albums from your library.

Tune It! is a piece of software that helps musicians to tune their instrument. It can also be used to monitor the pitch during live performance.

Tune It! is based on a original and very accurate pitch detection algorithm. It can tune a wide range of instruments such as guitar, bass, piano, flute, violin, saxophone, etc…

Tune It! is available for both Windows and Macintosh platforms. It can be ran as a standalone application or as a plugin within a VST or AU host.

Smart Mix Player is a free auto disc jockey player for Linux and Windows. It plays audio files as a non stop mix, but not in the way that traditional auto DJ software does!

Most of these players mix songs together at the end of a song with a simple fade out and fade in. Smart Mix Player goes a big step further and mixes like a real DJ! 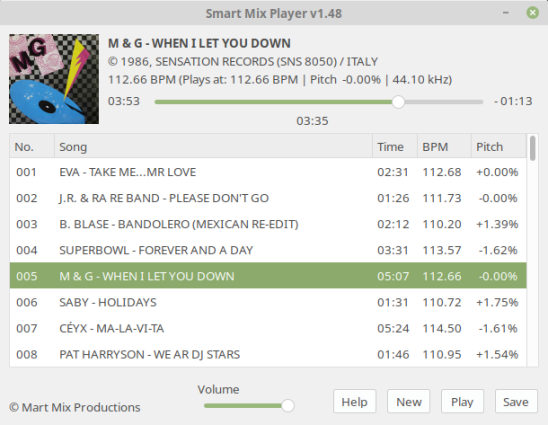 Playlists, or named lists of songs, are an essential aspect of Foobar2000. Whenever you add a song to Foobar, you are adding it to one of Foobar’s playlists. Foobar allows you to create and maintain different playlists, which are just entitled lists of your audio tracks (files). The playlists link to audio files in a ‘many to one’ relationship; that is, there can be many tracks on different playlists that reference the same audio track. Foobar can import and exports playlists in a variety of formats; and stores its own playlists as .fpl files.

Playlists can be created manually by adding individual songs, or automatically by specifying a set of conditions in a query with the result displayed as an “Autoplaylist”. Manually created playlists are static, they don’t change unless you change them; Autoplaylists are dynamic, that is the results may change whenever the Autoplaylist is queried.

Playlists created manually can be edited directly, while Autoplaylists are edited by modifying the query. However, you can save the results of an Autoplaylist as a new static, and therefore editable, playlist.

You will now have a new Autoplaylist listed on the playlist manager tab with the name of the genre you selected. Playlists created this way are called an Album List branch.

Creating an Autoplaylist of a folder’s contents: